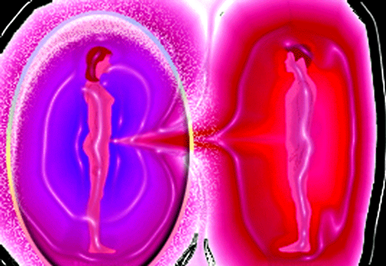 Examples of attentional interaction ideal for the recognition of sensations and consequences brought about by the flow of vital energy.
The attention bridge. Chapter 10.

Throughout this chapter we will dramatise common attentional interactions which many of us will experience. These interactions are attentionally imbalanced, making them particularly useful in helping us recognise the sensations and consequences of receiving of transferring vital energy.

Greek mythology tells the story of Narcissus. He was a young man who, while drinking from a fountain, saw his own reflection and, not knowing that it was his, fell in love with it. The fascination he felt when contemplating his own face was such he drowned when trying to reach it.

We talk of narcissistic personalities. These are people who are hardly able to see beyond their own mental processes. You know – those people who have little interest in what anyone else has to say.

The level of openness of these subjects, when they do listen to those they are in conversation with, is very low and consequently they transfer so little vital energy to you that you find it hard to keep on talking.

However, when these individuals are doing the talking, it is difficult to get a word in edgeways and invert “the hourglass effect” in your favour.

There are also many profoundly narcissistic people who pretend not to hear anything they do not want to talk about. If a subject does not interest them how could it be of interest to anyone else? They choose the topic of conversation without considering if what they saying interests anyone else.

When we cross paths with a narcissist one of two things can happen: either we see what is coming and find a way to break away from them or, despite not having any desire to converse with them, we feel unable to interrupt them or leave them mid-sentence and end up reluctantly giving them our attention. There is generally a unidirectional hourglass effect during these encounters which leave us with a marked loss of vital energy. After the initial drop in energy, we feel lethargic and sleepy.

From now on, this once tedious situation offers us the opportunity to observe the sensations brought about by a loss in vital energy.

Although, it may be that we ourselves are the ones who go round demanding other people’s attention and absorbing their vital energy. As they say: “People who live in glass houses shouldn’t throw stones.” If this is the case we need to take action to ensure that our obsessions do not steal our attention and energy which we subconsciously, and as a form of compensation, then try to steal from other people.

Other similar cases are those which involve small children, drunken alcoholics, the senile or people who suffer from psychosis or mental dysfunction. As a general rule, their respective kinds of narcissism do not allow them to offer an adequate degree of attentional openness to those who interact with them. And until you learn to manage such people, and even then, you tend to suffer a notable loss of vital energy in their company.

Attending the lessons of the most boring teachers at school

Most of us will have had to sit though the classes of the most insufferably boring teachers who were incapable of inspiring any interest in their words. They would, without being conscious of the fact, suck us dry of energy. Because, let us not forget, that while the person who gives attention is emptied, the one who receives it is filled up with vital energy.

Classes given by this type of teacher cause the whole class to enter a state of collective stupor.

I want to make clear that those teachers who manage to excite our interest also take our vital energy. It is just that we give them it more readily because in exchange for our attention they manage to stimulate us in some way such that the feeling of having been emptied of our vital energy does not leave such a deep impression on our body memory.

Watching television or reading a book

Of course, we have the faithful lover of those who have nothing better to do than waste their time and energy – the television.

The television, being an inanimate object, is unable to direct attention at its viewers. So that when they direct theirs at a programme being broadcast, their attention will never be returned.

Where television is involved the hourglass effect will always be unidirectional and it is not difficult to observe the depletion of vital energy this brings about.

I know some people who find it hard to get to sleep unless they have a television in front of them sucking up every last drop of their energy at the end of the day.

So we can get addicted to anything.

Including having our energy sucked out of us!

When we read a book exactly the same thing happens, given that books do not pay us any attention either.

Another situation where the outward flow of energy is evident is when we cross paths with someone we feel very sexually attracted to.

If we observe what we are feeling inside at that moment, we may perceive a loss of energy.

The same happens, but in the other direction, when we are the recipient of one of those smiles or glances which pumps up our self-esteem.

These types of experiences offer us the opportunity to note how the attention we receive enters us like a shot of energy – after all that is exactly what it is. And if the high is really good we may have the feeling of walking on air with a smile from ear to ear.

When someone inspires strong emotions or feelings

Whenever a person gets someone else’s attention and induces strong emotions or feelings, the second person accords them a high level of attentional openness and the transfer of vital energy is considerable and evident. This happens, for example, when someone feels particularly impressed, sympathetic, intimidated, intrigued, or admiration for the behaviour, the words or even the mere presence of an individual. In circumstances like these both the emitters and receptors of the vital energy find it easier to detect the sensation associated with the increase or decrease of energy they have undergone.

When a person lies or hides something, they need to withdraw their 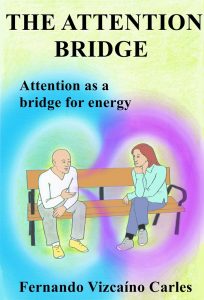 attention inwards to a greater degree than they would if they were simply mentally searching for the words to tell us the truth. After all, they have to think of ways to avoid being caught out. And as a result of this extraordinary degree of withdrawal we are pushed to transfer an equally extraordinary quantity of vital energy to them.